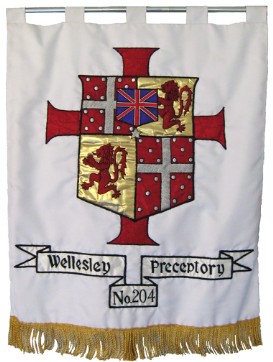 A history of the Preceptory

Wellesley Preceptory was founded at Wellington College on 13th May 1918 and met at the Wellington Hotel just outside the college gates. At this place and time; just after the battle of Arras, with the second German offensive at its height and the attack on Zeebrugge only a fortnight past, one is not surprised to find among its founders four Army officers, one Naval officer, and presumably as a counterbalance three clergymen. Two of whom were or became canons.

Of the three remaining founders, the Almoner was the Right Worshipful Brother Charles Keyser, Provincial Grand Master of Hertfordshire (then owner of Aldermaston Court) and a well known friend of King Edward VII. T Rowland Kent was a Reading solicitor and a prominent mason and the founding Preceptor. Thomas Hunt was the owner of the firm of printers who, for many years, printed and produced the Berkshire Masonic Calendar.

The combination of Church and Army continued for many years. Perhaps the most senior member was Admiral Eustace, who became a joining member in 1923. The original banner was designed with a very simple style, reflecting the Preceptory summons; plain Black & White and very little changed since 1918. It was hoped that the banner would remind the knights of the Medieval Order, our founding in the dark days of the 1914 / 1918 war, and our Founders.

On 6th July 1950 the Wellesley Preceptory moved to the Reading Masonic Temple. Then in 1964, Buckinghamshire joined the Province of Oxfordshire, & Berkshire. On 5th July 1968 V.E.Kt.L F Cheyney (another Wellesley knight) was appointed Provincial Prior and at the 50th Anniversary Celebration meeting the Minutes of the Consecration meeting were read. But by 1969 the Reading Masonic Temple was sold and a temporary move to Maidenhead was made. The Preceptory moved in 1970 to the Berkshire Masonic Centre, Sindlesham.

The Wellesley Preceptory sword and scabbard is dated not later than 1350 and was picked up on the battlefield at Omdurman by Capt. The Viscount Cruckshank (the Provincial Vice-Chancellor) and presented it to the Preceptory in 1987. In 1991 E.Kt.J M Hooton (Past PGM of Berkshire) was appointed Provincial Sub-Prior.

On the 10th May 1994 a new Wellesley Banner was dedicated and also in 1994 Reading Old Boys Lodge No. 3545 presented a Banner Pole to the Preceptory. A 90th Anniversary Celebration was held on 11th November 2008 and planning is now underway for the 100th Anniversary.