Preceptory of Friendship and Care No.514 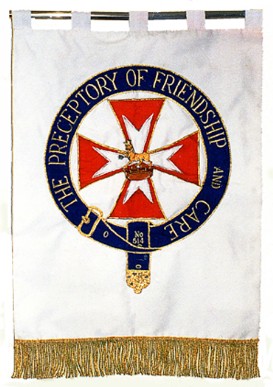 A history of the Preceptory

The Preceptory came into being on Wednesday 24th March 1982 when it was consecrated by the Provincial Prior, R E Kt Leonard Cheyney, OBE KCT, at the Berkshire Masonic Centre, Sindlesham.

The decision to form the new Preceptory was taken in order to relieve pressure on Wellesley Preceptory, No. 204, who had a great many candidates and at that time, it was taking up to 18 years to attain the chair. A number of members of 204 became founders of 514. It should be mentioned that 30 years later, many members of 204 are regular visitors and on occasions continue to help out.

The driving force was Kt Tommy Thompson. Tommy was the Registrar of 204 and became the first Registrar of 514 and remained in that office until 2002. The first knight to be installed at the first regular meeting was Kt Raymond Head. E. Kt Basil Burwood-Taylor conducted the ceremony.

At the meeting on 19th June 1996 the Preceptory decided to purchase a banner and this was dedicated by the Provincial Prior R E Kt L F Dring on 13th March 1997.

Looking back over the last 30 years, the Preceptory has been fortunate to have had a steady stream of candidates with remarkably few meetings where a lecture was given. However mention should be made to knights who have stepped into the breach when required including Kts Geoff Finney, Tommy Thomson, Llew Griffith, John Hayes and a memorable talk by Kt Keith Blanchard, who was a chaplain at Sandhurst, on the Just War theory. In recent years two Boar’s Heads meetings were abandoned at the last minute in December due to heavy snow falls and chaotic traffic conditions. This caused the Registrar and Treasurer much grief. So far there have been 70 knights who have been members of the Preceptory and the current membership is 26. Sad mention should be made of E Kt Bob Palmer who died during his year in the chair in February 2000. A number of knights over the years have been honoured with active Provincial Office and mentioned here should be made of V E Kt Raymond Head and E Kt Rodney Bancroft who have been Provincial Marshals. E Kt Graham McGowan-Smyth is our current Sub-Prior.

No history of the Preceptory could be complete without mentioning two further people. The first is Mrs Irene Thomson, the wife of Tommy Thomson. From every meeting between 1982 and 2004, she would help set up the Preceptory and she provided the flower arrangements for the Altar from her garden. She was truly a great supporter of the Order and she thoroughly deserves to be remembered as part of Tommy’s generation. They were assisted by E Kt Deryck Moore who attended all our meetings and directed the setting up and breaking down of the furniture. E Kt Deryck became an honorary member in 2007, but sadly died in August of 2016, aged 83 years.

May this Preceptory go into the next 30 years with the same enthusiasm, spirit of friendship and great teamwork that has marked its first 30 years.